Our Story: After Transplant – Short-term

We went for follow-up visits at the transplant center once a week for the first three months, then once a month for a year. We actually found these appointments to be extremely helpful with adapting to medications changes. The regular medical testing kept us informed on how things were going. We also got explanations and answers to a myriad of questions.

Every appointment involved (and still does) a chest xray, pft’s and extensive bloodwork. We have also become accustomed to frequent bronchoscopies so that any signs of early infection or rejection can be treated before they become bigger and harder to treat problems. That makes for long and tiring days, but if problems arise, it is much easier to deal with them early in their development rather than later. 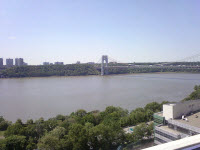 At home (or at the hotel), we learned about the many new pills to be taken, and practiced our new daily routine including taking vital signs, peak flow breathing measurements and incentive spirometer breathing exercises. Then there’s the tracking of blood sugar readings, IV infusions, oral medications and cardiovascular exercise. And attending pulmonary rehab three times a week. That kept us busy!

We learned that we had a “new normal;” the way we reacted and treated CF pre-transplant was in the past and adjusting to the new way of embracing life took some getting used to! We had to continually adjust our expectations to the new way of living with new lungs. Yes, breathing was easier; but pain from the incision, secondary pain from nerves damaged during surgery, extraordinary diligence in infection control and side effects from new medications were all part of the adjustment.

We also learned lifestyle changes such as food safety restrictions, environmental concerns (transplant team describes these in detail), masking, sanitizing of hands. Each Center is different in their rules and restrictions, so be sure to check with your team to learn what’s allowed and what’s not.

We found our home care nurse to be a tremendous asset. We left the hospital with a PICC line (oh no, post-transplant you’re not done with those!!). We were blessed with an incredibly kind, competent, knowledgeable, caring nurse. Beyond the medical care, she walked through the loneliness with us, put her arm around us and hugged and encouraged us. She explained that so much of what we were experiencing was a consequence of the massive levels of medications that we were not used to.

Think of how you feel on the prednisone doses for CF exacerbations and then imagine that during the transplant surgery my husband (and I believe all patients) was given 1,000 mg of prednisone. That’s not a typo – there are three zeros! So the combination of being away from home, in unfamiliar environments (we missed Wegmans like crazy!) with unfamiliar people, results of super duper medications and learning to interact with a new health care team was all overwhelming. Knowing what to expect helps alleviate the feeling to some degree.

Being away from home for an extended period for the surgery and recovery created a pile of items on our to-do list once we were back home. We missed the end-of-school year for our kids, so there were piles and piles of school projects and papers to sort through. Ditto for bills, medical paperwork, months of mail, yardwork, vehicle maintenance. The long list was daunting to even the most organized ones in our midst! Also, after being away and having a loving community who was involved in a fundraiser for our family pre-transplant, just going to the grocery store was often exhausting for me. We did have assistance with house cleaning and meals which was a huge blessing.