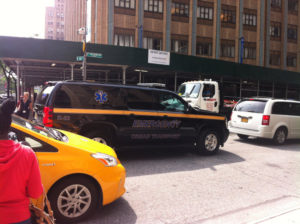 Once we received “the call” at 1:00 AM, we drove all night long, arriving at the hospital at 7:00 AM. The first thing we saw: the SUV in front of the hospital with the words “Emergency Organ Transport” written on the side. What a rush of adrenaline that we will never forget!

After signing in at Admissions, we went to the transplant floor of the hospital for the pre-op workup. Because lungs are only good outside of the body for six hours, and because we live six hours from the hospital, the surgeon had warned us of the possibility that a set of lungs would look good at the time of “the call,” only to realize that the lungs were not viable for transplant by the time we arrived. We’d heard of other patients having several, even as many as eight times coming to the hospital, only to have to go home with no surgery. So, it was at this time that we began to hope this was not a false alarm.

Once on the floor, we were told that the day would be filled with “hurry up and wait” scenarios. Indeed! We were rushed around, following orders such as: “Take this medication, it’s your very first rejection pill.” ”Put this gown on.” ”Be prepared to be shocked at how much blood we are going to draw from you.” ”Be ready for one IV after another.”

We were next rushed to the OR waiting room where we waited and waited, still unsure whether the surgery was a go or not. Then my cell phone rang: “Mrs. B, the lungs are good, surgery is a go!”. Not long after that call, we heard someone running down the hallway saying “it’s a go!”. And someone else yelled, “which one?”. And the response: “All of them, the single lung, the double lung and the heart”. What a moment. We knew then that the sign hanging outside the hospital was true: “Amazing things are happening here.” And we were right smack in the middle of it!

Soon the surgeon came and said “we’re ready.” They whisked my husband away to the Operating Room. Eight hours later, that same surgeon came out to tell me that the surgery had been a success and that they would be watching him very closely for the next 24-48 hours for bleeding and trauma. 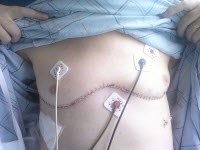 What an emotionally charged moment that was, only to be followed with many more in the following days as he began the long, long road to recovery, beginning in the CardioThoracic ICU. Those were challenging, exhausting, physically, emotionally, mentally, spiritually draining days for both of us. But the transplant support team was with us every step of the way, explaining what was happening. The medications and procedures were vastly different than any hospitalization we had ever experienced – and by the time you’re recovering from a double lung transplant, you’ve had more than a few hospital experiences, as you know!

Less than a week later, my husband was moved to the transplant floor. There we began learning the new medications, their names and their purposes and how and when to take them. His heart and lungs were monitored constantly. He had a blood transfusion. We began learning the ins-and-outs of infection control that we would need to know as a result of all the new meds. The good news was that he also began walking with 100% oxygen saturation on room air!

In the days that followed, we continued our relationships that began in the CTICU with other transplant patients and families. We found support in the network with others going through similar situations. There were also educational and support seminars offered at the hospital to assist us in learning about transplant and the life-long commitment we would need to have in complying with a lifestyle that would be nurturing of the new lungs.

He was also on several IV medications, so we were connected with a new-to-us nursing company that arranged home nursing at the hotel as well as medication delivery upon discharge. You may be familiar with the logistics and potential complications of arranging home care after a tune-up at the local hospital. When you’re six hours away from home and making those same arrangements after a major surgery that requires significant lifestyle changes, those logistics suddenly become much more complicated!

We were also learning the ropes with a new local pharmacy that had smooth connections with the transplant center, hence making them the common sense one for us to use. Our transplant social worker consulted with me frequently, though, to make sure the arrangements worked for us, both at the hotel and then the transfer of care once we headed home.

Helpful note: any familiarizing you can do of the geography in the area of the transplant center you choose will help when it comes to these details. Having a laptop or internet access will also be a huge benefit. And have your cell phone charged at all times! I put the charger in our backpack so it was with me at all times at the Center.

The last step was discharge. To qualify, we had to pass a test, proving we understood the meds and lifestyle changes. This was more important than the standard discharge questionnaire you complete after a tune-up. Compliance with these new requirements is critical to transplant success – and a whole new experience.