First, we had to decide whether or not to pursue lung transplantation, or let end-stage CF take its natural, unpleasant and undesirable course. Obviously, we chose to pursue transplant. This is a heavy decision, loaded with lifestyle commitment and responsibility. 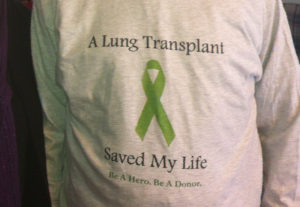 As a family impacted by CF, lung transplant was always in the conversation in one form or another. However, perhaps like you, we didn’t readily embrace the concept of transplant. We listened to the doctors mention it and knew that as pft’s declined it would become a more prominent matter of discussion. But we always hoped that we could keep it at bay. We always hoped it would be something we read about for other people, not personally experience.

But in our case, the lung health declined so rapidly within a period of months, that we had to decide very quickly whether we were going to pursue transplant or not. When the doctor said without transplant we had perhaps 6 months of life left, we began our research – fast. Not pursing transplant was not an option for us; we wanted to do whatever we could to save my husband’s life and if that meant a double lung transplant, so be it.

We consulted the internet, a friend who had had a lung transplant a few years prior and our insurance company to glean as much information as possible. And of course we were in touch with our CF doctor to assist in decision-making. We also contacted family members in the medical community to network with other knowledgeable people that could help guide us. For example, a nurse practitioner cousin connected us with a CF doctor in another city who offered helpful guidance on choosing a transplant center.